Near Pure Evil Wiki
Start a Wiki
ALL POSTS
This post is locked. 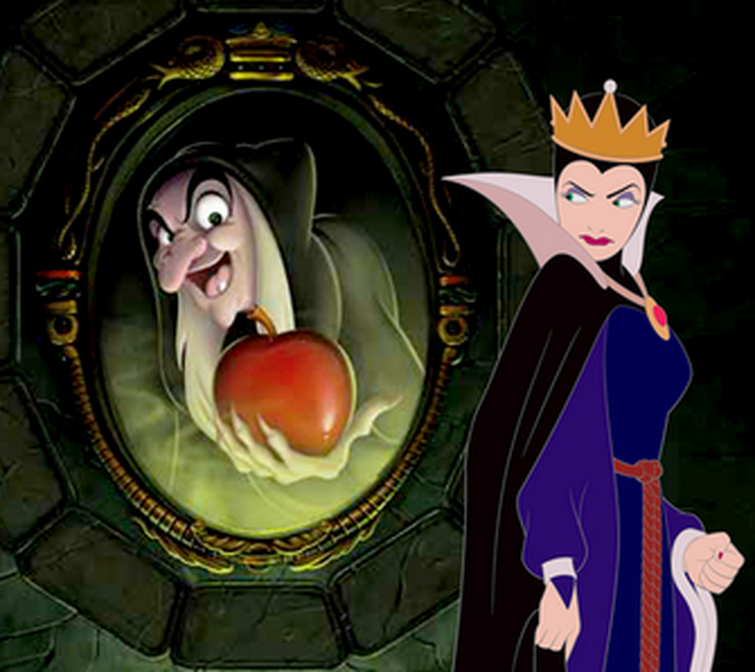 Well, I am doing a discussion this time since I am not really sure about this Near Pure Evil candidate. I am sure most of you already know who Queen Grimhilde is, even if you forgot that she does have an actual name. She is probably one of Disney's most well-known villains and she is the first real movie villain the studios introduced, and from my understanding, she is the first animated movie villain. I do think there is a chance she could qualify, but I am not too sure.

Snow White and the Seven Dwarfs is a 1937 animated Disney film that is known to be the first full length animated movie and Disney's first real animated movie. It is based on the story of the same name.

What could make Queen Grimhilde Near Pure Evil?

The Queen seemingly has no concern for anyone but herself, as seen through how she treats her stepdaughter, Snow White. She seemed nice to her at first, but she later seemed rather cruel after her jealousy took over her. She also was completely willing to kill her, hiring a man to kill her and bring her heart to her, and literally poisoning an apple that I guess would put her in a permanent sleep. May also point out that Snow White is around the age of 14? Yeah, technically, Grimhilde isn't just attempting to kill her own stepdaughter, but someone who could still be considered to be a child. She also may have not feed her all that much from my understanding, and remember, she did come very close in actually killing her, and she seemed to only really want to kill her so she could be fairest in the land.

Also, consider this; remember toward the end of the movie, she nearly crushed the dwarves with a giant boulder? Consider this; she nearly took the life of her own stepdaughter and now the seven dwarves who were trying to stop her... she nearly killed 8 people. This could arguably be an act of attempted mass murder if you really think about it since killing anyone over at least four could be considered mass murder. Yeah, she didn't succeed since she fell off a cliff, then got crushed by a boulder (if the fall didn't kill her, the boulder certainly did), and was probably eaten by vultures, but attempting mass murder is a serious and horrible thing that could arguably always stand out.

The Queen doesn't really seem to have very many redeeming qualities or excuse for her actions as well when you really think about it. She has no concern for anyone but herself can be very cruel and is willing to take the lives of innocent people so she can be fairest in the land or whatever, which could make her egotistical. However, it could be argued that the Queen, despite being very heinous, just hardly goes over standard villainy. However, there could be a chance that she could stand out enough since the possible attempted mass murder and attempting to kill someone who could arguably be a family member.

What could prevent Queen Grimhilde from being Near Pure Evil?

As I said before, Grimhilde just hardly goes beyond standard villainy. She was once considered to be disallowed on this wiki for that exact reason too, but honestly, there could be a chance that she could stand out enough for attempting a possible mass murder and attempting to kill her own stepdaughter. However, I am not too sure, since her villainy could be seen as simply standard compared to many other Disney villains who are and are not Near Pure Evil. Heck, Maleficent even committed similar actions, yet her villainy could be seen as standard which is why she is disallowed on this wiki. That is why I am not too sure about this one.

I am not too sure if I am being honest. Yeah, while being pretty heinous, I am not sure if she really does that much beyond standard villainy, but her actions could still stand out enough. But what do you think?

No official consensus, voting will be extended for two more days.

I am going with a weak yes because she attempted mass murder as she almost killed Snow White by making her eat the poisoned apple and attempted to kill the dwarves with the Boulder just to try to make herself “fairest in the land”.

I'll give her a yes. She showed excitement with the idea of tricking the dwarves into believing that Snow White was dead and having them bury her alive, as she was laughing about it. The only problem is… Snow White would've still been unconscious even when being buried alive because she was under the sleep spell. If the Queen wanted to have her buried alive while she was still conscious, I'd think she'd make it, but just barely. I found a video clip about it here: